I know…the month is closing down and I’m just now posting my 2011 reading list!  But I must speak to my inner guilt, and say..well, at least it’s still January!

Once again, with encouragement from LifeasMom, Carrie’s Busy Nothings, and Beth Stone’s Studio, I’m committing myself to another year of good reading with the Booking It 2011 project!  If you check out any of these blogs, you can see what they are reading, and read their reviews as the year progresses.  Last year I posted my reading list for 2010 HERE.  However, as things go, some were dropped and others added, so this is what I actually read:

For 2011, I’ve compiled this optimistic list and am really looking forward to all the great reading ahead!!

And I’ve added Faith Alone, by Luther, to my devotional list.  I hope Spurgeon won’t mind too much.

This list could take a wide detour if my courses in M.Ed assign copious reading projects!  So my ambitious aspirations, as Captain Barbosa would say, “are really more like guidelines.”

Please join me, and many others over at LifeasMom, for good reading, discussion, and encouragement!  What are you reading?

The vale of tears is but the pathway to the better country.
C H Spurgeon 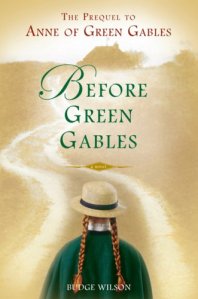 If you plan on reading Before Green Gables, by Budge Wilson, don’t read this post!  It’s full of spoilers, such as, Anne takes a train to Prince Edward Island in the last chapter, to be adopted by Marilla and Matthew Cuthbert. (Oops!)

Or, if you don’t like reviews, skip past this one, for words of hope and grace from the Scriptures and Paul David Tripp.!  It’s really all related, somehow.

Before Green Gables, by Budge Wilson was on my must-read list that I posted HERE.  This book was given to me by an extremely devoted fan of Lucy Maud Montgomery, who has read every single one of her books–none other than my son-in-law, Andrew.  He hasn’t read this book yet,  so I hope he doesn’t read my review.

The book starts off much like any other “Anne” read, and one falls immediately in love with her endearing parents, Walter and Bertha Shirley.  But we know, before ever opening the book,  Anne could never have boarded that train to Prince Edward Island if things went well for the sweet Shirleys.  They die…and the bleakness begins.

Anne’s life goes from bad to worse, as she’s taken in by an angry, over-worked mother of five, with an alcoholic husband.  Fast-forward eight or nine years, and she’s placed with another family with three sets of twins under four years old, then finally, on to a Dickensesque orphanage.  LMM alluded (in her books) that trials were the very making of young Anne, so I was prepared for some hardships.  However, I couldn’t help but yearn for more light and happiness for our “Anne girl.”   As one reviewer on amazon. com wrote, “the only thing that bothered me about the book was that it was DEPRESSING.”

However, I could get past the bleak backdrop of her daily life, knowing that Green Gables lay in wait for Anne in a mere 11 years… But, the most disturbing aspect of the story was the uber-wise, hyper-intellectual Anne of 4 years old!  True, she’s a unique, gifted, insightful, opinionated and verbose young lady when we and Matthew Cuthbert first meet her, but as a toddler (?)–her thoughts, emotions, and conversations depart from reality too much for this reader.

Well then, do I recommend the book?  Actually, yes!  Surprise!!  The bleakness of Anne’s childhood contrasts so significantly with Green Gables and Avonlea, that the reader gains a greater appreciation for all that lies ahead for our kindred friend, making the real Anne series shine brighter, happier, and thankfully, full of promise and hope.

Our lives are much like Before Green Gables, filled with pages, or maybe chapters, of struggles and difficulties, highlighted with some joys and a lot of grace.  We don’t know what a turn of the page will bring, but we do know how the story ends!

“Truly, truly, I say to you, whoever hears my word and believes him who sent me has eternal life. He does not come into judgment, but has passed from death to life.” John 5:24

The riches of such an ending, or beginning, is beyond our understanding:

“As it is written, ‘No eye has seen, no ear has heard, no mind has conceived what God has prepared for those who love him.'”  I Cor. 2:9

“The world is still a terribly broken place, not yet restored to what it was created to be. [But] we live with celebration and anticipation.  We celebrate amazing gifts of grace what we’ve already been given, while we anticipate the end of the struggles that will face us until the final chapter of the great story of redemption comes.

We do live in the in between. We do live in the hardships of a world that teeters between the beginning and the end.  But we dont need to be discouraged and we don’t need to fear, because the end of all those struggles has already been written, and so we’re guaranteed that the things that are not yet, will someday be!”  [1]

Want some other perspectives of the reviewed book?  Try here:

Watts Up With That?

The world's most viewed site on global warming and climate change