Lists.  We love them! We make lists for shopping (even if we leave them at home), lists of chores, resolution lists, etc.  They help us by providing structure and direction, especially on those busier-than-normal kind of days. 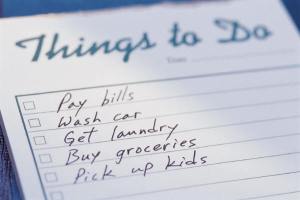 But lists can’t be too long, or we get discouraged.  It’s been said that that’s why God gave us only 10 commandments (and even those are tough!)

Perhaps, like me, you’ve read books with lists on how to a better wife, to love your husband, to be kind, and all the things you think you should be great at by now.  But, after all the reading, the lists seem too long.  Maybe you remember one thing, but even struggle with that!   You don’t need another book, seminar, or list.  So, today, I humbly offering my short list:

How to Love your Husband

1.  Forgive as you’ve been forgiven.

That’s it!  This isn’t meant to nullify all the books and sermons that address the convoluted layers of such a deep and intricate relationship as marriage. But if we don’t start here, if we don’t seek God’s grace for ourselves, and then, by His grace, turn that forgiveness towards our husbands, then all the lists in the world won’t get us anywhere.

Review the story Jesus told his disciples, and ask Him to speak to your own heart:

Therefore, the kingdom of heaven is like a king who wanted to settle accounts with his servants. As he began the settlement, a man who owed him ten thousand bags of gold was brought to him. Since he was not able to pay, the master ordered that he and his wife and his children and all that he had be sold to repay the debt.  “At this the servant fell on his knees before him. ‘Be patient with me,’ he begged, ‘and I will pay back everything.’ The servant’s master took pity on him, canceled the debt and let him go.

But when that servant went out, he found one of his fellow servants who owed him a hundred silver coins. He grabbed him and began to choke him. ‘Pay back what you owe me!’ he demanded.

His fellow servant fell to his knees and begged him, ‘Be patient with me, and I will pay it back.’  But he refused. Instead, he went off and had the man thrown into prison until he could pay the debt.  When the other servants saw what had happened, they were outraged and went and told their master everything that had happened.

Then the master called the servant in. ‘You wicked servant,’ he said, ‘I canceled all that debt of yours because you begged me to. Shouldn’t you have had mercy on your fellow servant just as I had on you?’ In anger his master handed him over to the jailers to be tortured, until he should pay back all he owed.  “This is how my heavenly Father will treat each of you unless you forgive your brother or sister from your heart.”

Dear Father, Thank you for forgiving me! You rescued me when I didn’t even know I needed rescuing.  Through the Cross, you drew me with chords of love, forgiveness, mercy and grace.  So how dare I hold back my love, forgiveness, mercy and grace from anyone else, especially my husband? Help me, Lord, to be forgiving.  Help me to be an instrument of grace in my home, to accept your forgiveness for my own sins, then forgive others, starting with my husband.  I can’t do it alone, but your Word says that You are at work in me, both to will and to do of Your good pleasure.  I need you to make me willing and able to forgive.  In Jesus’ name, Amen.

Please join us every Tuesday as we learn together how to grow, love and serve the Lord by loving and serving our families.

Watts Up With That?

The world's most viewed site on global warming and climate change